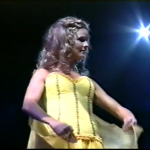 Rebecca Brady in ‘Lord of the Dance’

A native of Dublin, Ireland, Rebecca learned Irish dancing from the renowned Irish Dance teacher/choreographer Marie Duffy, winning many Leinster and All-Ireland championships. Rebecca attended nursing school in Belfast, Ireland, and after receiving her degree, she auditioned for ‘Lord of the Dance.’ She was chosen as a cast member for the Las Vegas troupe of ‘Lord of the Dance’ and after a 6-year run, Rebecca became part of Michael Flatley’s show ‘Celtic Tiger’ and helped with the choreography. Rebecca earned her TCRG under the Irish DancingCommission, An Coimisiún le Rincí Gaelacha, in Dublin, Ireland. She now teaches with her husband Patrick at the Brady Campbell Irish Dance School. She, Patrick, and their three children reside in Avon, OH.

Patrick Campbell in ‘Lord of the Dance’

Patrick Campbell is a native of Cleveland, OH, and has been dancing competitively since he was 6 years old under the direction of the Masterson School. He won numerous regional and national competitions. Following the 1998 World Championships, Patrick joined ‘Lord of the Dance – Las Vegas.’ While in the show, Patrick was one of the principal lead dancers, performing as Don Dorcha, the Dark Lord. There he met his Dublin born wife, Rebecca Brady-Campbell, also a lead dancer. After Lord of the Dance, Patrick went to help choreograph Michael Flatley’s show ‘Celtic Tiger.’ Patrick earned his TCRG under the Irish Dancing Commission, An Coimisiún le Rincí Gaelacha, in Dublin, Ireland. He has appeared on many TV shows including, the Donny and Marie Show and the Jerry Lewis Telethon. Patrick now resides with his wife, Rebecca, and three children in Avon, OH. He teaches at the Brady Campbell Irish Dance School with Rebecca. He owns PJ McIntyre’s Irish Pub and he is also a Cleveland Firefighter.